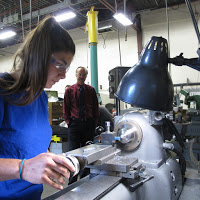 At Women in Manufacturing, we are committed to supporting women in the manufacturing sector. We firmly believe that mentorship and community-building will help attract and retain women in manufacturing. As part of our mission, we feature on our blog the stories of women we admire who are currently working in manufacturing. The following is the latest installment of our "Hear Her Story" series.

Hannah Lenoce is a smart, friendly, and talented young woman. But, as a young teenager, she found that the traditional classroom environment did not suit her. Uninterested in her coursework, Hannah dropped out of high school at 16.
She earned her G.E.D. and took a job working 60-hours-a-week at a car wash. It was there that the vice president of Marion Manufacturing in Cheshire, CT first noticed her.

“A lot of us at the plant went to that car wash,” Douglas Johnson has been quoted remembering. “We would see Hannah running around the cars faster than anybody else. She had those soft skills and that work ethic that everyone’s looking for.”

Several Marion employees recognized her talent and convinced Hannah to join the company as an intern. Soon, she joined Marion’s apprenticeship program.

That effort, Hannah notes is not gender-specific. “Anyone can find a career in manufacturing,” she says. “It is a great field with so many different possibilities.”

In Hannah’s community, though, manufacturing remains a uncommon career choice for women. At the Advanced Manufacturing Program at Naugatuck Valley Community College – a program Hannah recently completed in order to earn hours toward her national certification as a tool and die maker - she reports that her class had only two female students.

Still, Hannah did not feel that she stood out among her classmates, “Everybody treated me the same,” she said. “I’m just another toolmaker.”

Hannah also encourages other women to consider manufacturing careers beyond the false stereotypes they may have heard about the sector. “It’s not dirty at all,” she says. “My workplace is clean and quiet.”

When she’s not working, Hannah is still working – on cars. Far from her days at the car wash, Hannah says she now spends downtime taking care of her own cars, especially her prized Mustangs.

In the future, Hannah thinks she might go back to school to study tool design. “I’ll definitely stay in manufacturing,” she says. “There are so many opportunities.”

Natalie Panek, Mission Systems Engineer at MDA Space MissionsJuly 14, 2015 Women in Manufacturing: Are You Investing in the Other 50 Percent?June 11, 2015